Bauman's started in 1892 when John W. Bauman purchased a cider press and operated it with the steam engine in his carriage manufacturing shop. Soon he began cooking apple butter for farmers of the community. They called it "lattwaerrick" in their Pennsylvania German dialect. 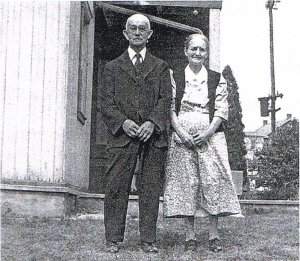 It has been said that John used the apple butter recipe his wife, Catharine Wiegner, had received from her Schwenkfelder ancestors, who had settled in southeastern Pennsylvania alongside John's Mennonite forefathers.

In 1734 the followers of Caspar Schwenckfeld came to Pennsylvania as Christian refugees from Silesia, seeking freedom of worship. They survived on the high seas due in part to an ample supply of apple butter, a fruit product that keeps its goodness without preservatives or refrigeration. On arrival they celebrated with a meal of bread and apple butter, an occasion still commemorated in Schwenkfelder churches.

Before long John Bauman's apple butter business had replaced his carriage shop. As satisfied customers spread the word the business has continued to grow since the turn of the century. Their youngest of nine children, Stanley, became a partner in the business after he graduated from Ursinus College in 1928. Stanley then married Ruth Latshaw in 1941 and together they ran the business until Stanley's death in 1977.

Now in the third generation Bauman's Apple Butter Factory is still a family operation in the Nineteenth Century village of Sassamansville.

The founder's grandson, Harvey, a mechanical engineer, along with his wife, Kathy, trained as a teacher, keep the tradition going. Their children, John and Heidi, have helped out in the factory since they were young.

John just received his Master's degree in Electrical and Computer Engineering from Carnegie Mellon University and has moved to Palo Alto California to begin a job at VMware corporation. He will still take care of our website and brainstorm electrical problems over the phone with his dad.

Heidi is attending Eastern Mennonite University in Virginia, majoring in Music Education, and helps us out in the store during vacations.

Images from our history

Click on an image to open the (very large) picture

The patent for our cookers

The second page of that patent

The advertisement for the "Baumo" wrench

A box of our old healing salve

Some of our old stationary